February 22, 2021 By nickt in Stronghold Warlords Comments Off on The Making of Warlords (Teaser #3)

The Making of Warlords (Teaser #3)

While new gameplay footage is coming later this week, today we’re releasing our third and final ‘Making Of Stronghold: Warlords’ teaser. Today’s video is centred around the reveal of Stronghold: Warlords, which took place way back in June 2019. Featuring a snippet of what you can expect from the full documentary at launch, this quick look shows Paul and Simon discussing what goes into revealing a game to the press, as well as including a few behind the scenes E3 clips!

Available at launch as part of Stronghold: Warlords – Special Edition, this feature-length documentary takes a look behind the scenes with over two years of game development at Firefly Studios. Unpacking the complex process of creating a modern strategy/sim hybrid on PC, the documentary is designed to provide insight into these unique genres for those curious about their creation. 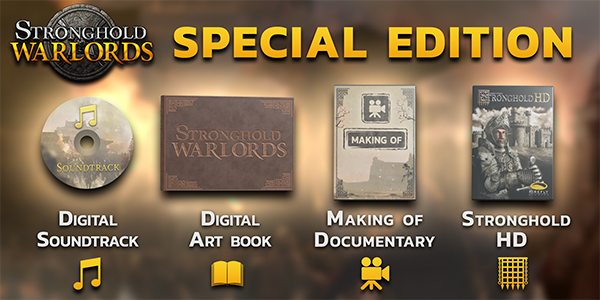