September 14, 2020 By nickt in Stronghold Warlords Comments Off on Storms and Flooding!

From medieval events and the distinct possibility of fire… To new changing weather conditions and map hazards, Stronghold: Warlords’ ‘Path of Peace’ campaign will give you plenty to think about while growing your castle economy.

Following The Scribe, Warlords’ economic-centric missions will test your city builder and sim skills as you’re tasked with gathering resources, growing your population and fulfilling unique objectives as you fight against the clock (or in this case – tiger attacks).

END_OF_DOCUMENT_TOKEN_TO_BE_REPLACED

September 2, 2020 By nickt in Stronghold Warlords Comments Off on Warlords Gamescom Trailer

As shown during the Gamescom Studio show, we’re giving you a first look at our Japanese campaign missions following Toyotomi Hideyoshi! This new developer commentary footage shows details on the new ‘Warlord System’ and provides a closer look at some of the new units coming to Stronghold: Warlords at launch on January 26th, 2021.

END_OF_DOCUMENT_TOKEN_TO_BE_REPLACED 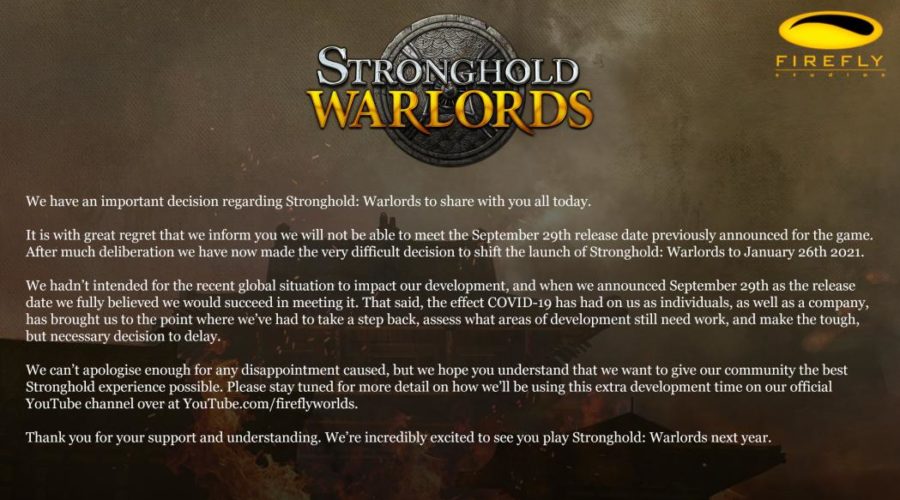 August 19, 2020 By nickt in Stronghold Warlords Comments Off on New Release Date

It is with great regret that we announce we will not be able to meet the September 29th release date previously announced for Stronghold: Warlords. After much deliberation we have now made the very difficult decision to shift the launch of the game to January 26th 2021.

We hadn’t intended for the recent global situation to impact our development, and when we announced September 29th as the release date we fully believed we would succeed in meeting it. That said, the effect COVID-19 has had on us as individuals, as well as a company, has brought us to the point where we’ve had to take a step back, assess what areas of development still need work, and make the tough, but necessary decision to delay.

We can’t apologise enough for any disappointment caused, but we hope you understand that we want to give our community the best Stronghold experience possible.

August 6, 2020 By nickt in Romans: Age of Caesar Comments Off on New Romans: AoC Dev Diary

We’re back with the second instalment in our Romans: Age of Caesar alpha road map series! Today Natasha and Ben once again join forces to bring you details of the latest exciting update, the political senate endgame. This is an early look at gameplay from our upcoming co-op city builder, currently in alpha and scheduled to launch in 2021. This is just one of many future updates coming to the alpha test, as we build out core features and prepare for a full launch next year. We note important community feedback daily and try to implement it if possible, so if you’d like to help us make Romans: Age of Caesar the best game it can be just go to PlayRomans and sign up today! END_OF_DOCUMENT_TOKEN_TO_BE_REPLACED

July 31, 2020 By nickt in Stronghold Warlords Comments Off on New Warlords Gameplay

Today we’re showing half an hour of brand new Mongolian campaign gameplay footage! Featuring developer commentary from Stronghold: Warlords Lead Programmer Tony DeLibero, this new video features hitherto unrevealed units, warlords and castle structures. A snapshot of the later stages of Warlords’ Mongolian campaign segment, today’s campaign preview takes players to 1227 AD as the great Khan moves to crush rebelling Xia forces. Surrounded on all fronts by hostile warlords and a well-protected enemy lord, players must first rush to bring each warlord under their command, before launching an all out siege on the enemy. Attacking immediately would be foolish, however with enough warlords pledging their gold, resources and troops, players can amass an army powerful enough to take down the enemy stronghold. END_OF_DOCUMENT_TOKEN_TO_BE_REPLACED

July 16, 2020 By nickt in Stronghold Warlords Comments Off on New Campaign Gameplay

We’ve just released new single player gameplay footage for Stronghold: Warlords, the latest RTS ‘castle sim’ from Firefly Studios. Taken from the Chinese portion of the game’s 31 mission campaign, the ‘Armies of Yan’ occurs toward the end of the Warring States period in 226 BC. Over the course of 40 minutes of uninterrupted gameplay, Senior Programmer Matt Smith walks us through the latest additions to the castle building RTS series. Showcasing new units like the Fire Lancer, the titular warlords mechanic and castle sieges, this video is the first in a new series providing an early look at the game’s main single player game mode.

As Warlords approaches launch new campaign previews will be released on our YouTube to tease game features and improvements, but also to collect feedback from players. With particular attention to community requests, new Warlord abilities and of course ‘wuselfaktor’, we’ve been paying close attention to player suggestions since the game’s E3 reveal. For over a year now our designers and devs have been processing feedback on the game’s visuals, sound effects and most recently gameplay using our Steam Game Fest demo.

Castle builders will be able to journey from ancient China and Vietnam to feudal Japan and the Mongol Empire when Stronghold: Warlords launches on Steam later this year.

July 9, 2020 By nickt in Firefly News Comments Off on Stronghold Sessions

This week we return to our community series ‘Stronghold Sessions’ to hear directly from Senior Programmer Matt Smith on the inner coded workings of the upcoming Stronghold: Warlords. Matt has been one of the key developers here at Firefly Studios for the last few years, working on everything from Stronghold Crusader 2 to Stronghold Kingdoms. So today you can sit back and relax as he takes you through what it’s like to be working on the systems and mechanics of our historical RTS series.

Our Stronghold Session interviews are intended to bring the fans and developers of the ‘castle sim’ series closer together, by giving you an extended look at who does what for the series and how they do it! We have extra episodes covering Production, Marketing, Programming, Design and 2D Art, so make sure you check out our YouTube channel for more.

July 2, 2020 By nickt in Stronghold Warlords Comments Off on Castle Defences

Today in a new Feature Spotlight we unveil 10 minutes of fresh gameplay for Stronghold: Warlords, revealing six siege defences available in the game at launch on September 29th. Living up to the series’ legacy as a ‘castle sim’, today’s reveal has everything from caged tigers to gunpowder traps and front line barricades. To defend against the many troop types and siege weapons in Stronghold: Warlords, players will be able to customise their walls with traps and bolster their outer defences. From classic Stronghold staples to new gunpowder-fuelled defensive traps unique to this new entry, Stronghold: Warlords will give players plenty of options for dealing with siege force of all shapes and sizes. END_OF_DOCUMENT_TOKEN_TO_BE_REPLACED

June 26, 2020 By nickt in Firefly News Comments Off on Stronghold Sessions

The Stronghold Sessions are intended to bring the fans and developers closer together. By giving you an extended look at who does what for the Stronghold series and how they do it. We have more episodes covering Production, Programming, Design and 2D Art so make sure you check out our YouTube channel for more!

June 19, 2020 By nickt in Stronghold Warlords Comments Off on Extended Gameplay (Free Build)

We have just released nearly an hour of fresh Stronghold: Warlords gameplay in the form of a full Free Build scenario play-though! Once again spotlighting our unique ‘Free Build’ sandbox mode, revealed last week as part of The Escapist Indie Showcase, here players are asked to construct their dream stronghold. Once built they can test their creation against increasingly challenging infantry invasions, siege weapons, difficulty settings and medieval ‘events’.

Watch as Aaron takes us through the basics of Free Build, how this classic mode will interact with the new Warlords system and even more Warlords gameplay fundamentals. Designed as a special game mode within Stronghold: Warlords, Free Build is essentially as difficult as you make it. Players who simply want to build to their hearts content are free to do so, while those who wish to create the tightest and most strategically sound citadel can test their theories with wave upon wave of AI invasions. Currently playable as part of the Steam Game Festival, Stronghold: Warlords was recently announced for release on Steam on September 29th. The game will launch with a full single-play campaign, bonus economic campaign, free build, custom skirmish mode and mutliplayer modes.