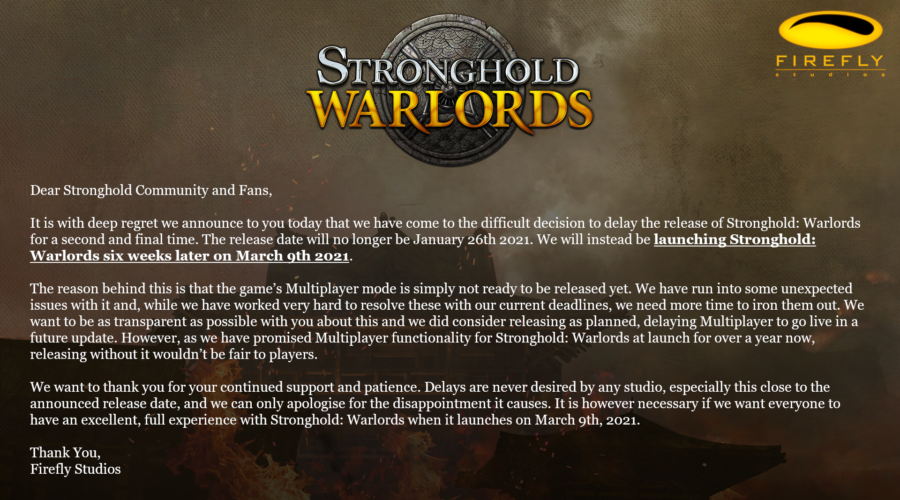 January 11, 2021 By nickt in Stronghold Warlords Comments Off on Release Date Delay

The reason behind this is that the game’s multiplayer mode is simply not ready to be released yet. We have run into some unexpected issues with it and – while we have worked very hard to resolve these with our current deadlines – we need more time to iron them out. We want to be as transparent as possible with you about this and we did consider releasing as planned, delaying Multiplayer to go live in a future update. However as we have promised Multiplayer functionality for Stronghold: Warlords at launch for over a year now, releasing without it wouldn’t be fair to players.

We want to thank you for your continued support and patience. Delays are never desired by any studio – especially this close to the announced release date – and we can only apologise for the disappointment it causes. It is however necessary if we want everyone to have an excellent, full experience with Stronghold: Warlords when it launches on March 9th, 2021.

In the meantime we have reactivated our old Warlords demo on Steam for anyone who missed it last year. Please bear in mind this build is from August 2020 and thus does not feature the polish, final feature set or roster of playable units you can expect from the game at launch. To play the demo version please follow this link for full details on how to download it on Steam (Expires February 19th).

If you’d like to discuss the demo with fellow fans and developers at Firefly you can do that by joining the Official Stronghold Discord.